Hey guys and girls some more progress made on the grey knight, i really didn't think that it would turn out as well as it has so far, i need to improve some areas, glazing to improve the contrast and some parts just need to be more tidy. I have learn't a hell of alot whilst painting the nmm and have to say that the most important thing really is to have the maximum amount of contrast, secondly is the positioning of the white highlights this will be the direct reflection of light. I think you could probably get away with not being so tidy as long as these elements are in place, say if you wanted to paint an army for example. and no im not going to do that i would have to be crazy.

Next will be the base that i still have not started it will be an industrial vibe i think. I don't think i've ever painted a model an not had the base finished before starting to paint.  more on that soon
hope you like it so far any advice or comments would be cool.
peace bd 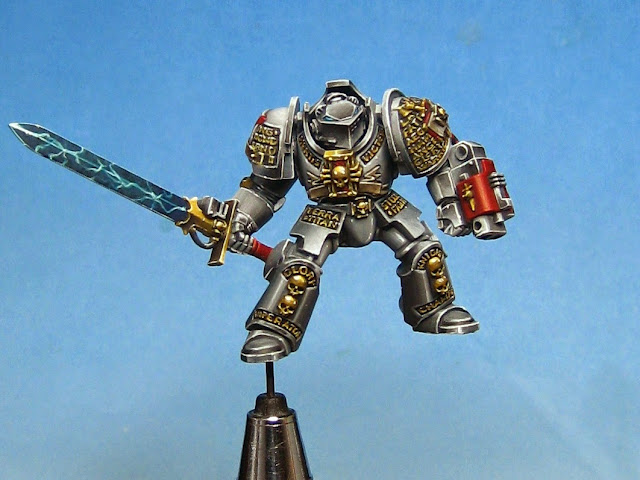 As you said, NMM method needs contrast, and you did it brilliantly. Maybe one more shade of black for silver, but that's a little detail.

I'm truly impressed, I'm currently painting a Space Marine in a green NMM kind, but I'm far of your result, I need practice :)

What are you going to do with the red parts ? I suppose they are not finished yet.

hey man yeah the red parts need highlights and the sword needs more work but im happy with it so far. glad you like it. good luck with your nmm green.keep up the good work.